So, I’ve long been commenting on the fact that legal publishers seem to embrace the use of copyright-free images for their cover art. This, however, goes beyond. Surely this…thing is the product of some child-art-prodigy. An editors offspring maybe? It looks like a poor sad fish has been skewered by a paperclip.

I’m wracking my brains but I see no connection between stationery fish and the rule of law. Help me out?

I had such a fun enquiry this morning! It started off looking like a simple request for an Act of the old Scottish Parliament. Easy-peasy since we have two sets of Thomson’s Acts of the Parliaments of Scotland in stock. However, my enquirer expected c.24 of 1661 to be on the topic of diligence… but it was not (dun dun daaaaa!)

We double checked a couple of sources, including Stair’s Institutions of the law of Scotland but the Act was always cited as c.24 of 1661. Then I remembered that, although Thomson’s Acts (known as the Record edition) is considered the key text, there are various other versions of the Scottish Acts available. Also, I later realised, since Stair’s work was published in 1681 he would certainly not be referring to a set of volumes commissioned by Queen Victoria!

I went off to find one of our tiny ‘Glendook’ editions of the Acts. The two volumes look striking when juxtaposed since the Glendook is only 16cm tall while the Record edition is literally larger than my torso!

Had fun working with these the other day. Details at: https://veryfinelibrary.wordpress.com/2016/12/21/pre-1707-scottish-acts/ #librariesofinstagram #libraries #research #books #bookstagram

Glendook is tough to work with. The tiny page size means tiny text. Also, there’s no space for extraneous information, such as year of enactment! As I paged through I happened upon what looked like the Act I was after but was required to leaf back several pages to check I was, in fact, looking at the correct year.

So, I confirmed that c.24 of 1661 was an ‘Act concerning appearand airs their payment of their own and their predecessours’ debts‘ which was just what we’d hoped for. I then used the Record edition index to establish the Act was noted as c.88 in that publication. Job done! All I had left was a bit of fighting with the photocopier to make big copies of tiny books and small copies of giant ones.

Some information on the two editions:

Record Edition
This is ‘Acts of the Parliaments of Scotland’ or ‘Thomson’s Acts’ by Thomas Thomson and Cosmo Innes, printed in twelve folio (43cm) volumes from 1814-75. Published by command of Queen Victoria, this edition was the most complete version of the Acts of Parliament published until that point, and has remained the key work used by historians ever since. The final volume contains an index which is very useful for tracking down Acts when you only have a name or subject.

Errors:  Separate but related acts are often merged into one, numbering of statutes is erratic from volume to volume, occasionally including forfeitures and other private business, in other instances leaving such acts out altogether. Original manuscript numbering is ignored completely.  Thomson’s overzealous editing means that some of the text, especially in the older Acts, is not as originally passed (see Notes on the Sources for the Parliaments of Scotland, 1426-1466 for details).

Duodecimo (or Glendook) Edition
Duodecimo Edition refers to ‘Glendook’s Scots Acts’ or ‘Laws and Acts of Parliament made by King James the First and his royal successors, kings and queens of Scotland‘ by Sir Thomas Murray of Glendook (1682). This was published as two volumes containing statutes from 1424 to 1681.  A third volume (1685 to 1707 by William Duke of Queensberry and others) was published later. The name ‘Duodecimo’ refers to the size of the volumes. These are the smallest volumes of the Acts we hold.

Errors:  There is a note on the St. Andrews University website detailing the errors in this edition of Scottish Acts.  Glendook’s work seems to be based on previous publications rather than original records. Of the two Glendook editions published, the earlier 1681 folio has fewer typos than this duodecimo edition.  The work is incomplete, excluding public acts and occasionally entire sessions of parliament but including Acts of Sederunt as if they were statutes.

Here’s another in my occasional series of “Law books which are slightly more exciting than most other law books”:

Summary
This fast-paced, inspiring and original work proposes that, if religions fade, then secular law provides a much more comprehensive moral regime to govern our lives. Backed by potent and haunting images, it argues that the rule of law is the one universal framework that everyone believes in and that the law is now the most important ideology we have for our survival.

The book concludes with the author’s personal code for a modern way of living to promote the survival of humankind into the future.Vividly written by one of the most important lawyers of our generation, this magisterial and exciting work offers a powerful vision of the role of law in centuries to come and its impact on how we stay alive

For the latest instalment in my occasional series “Law books which are slightly more exciting than most other law books” I present:

Hannah Mary Tabbs and the Disembodied Torso : A Tale of Race, Sex, and Violence in America by Kali Nicole Gross

How’s that for a title?

Njal, its hero, being the greatest lawyer of his generation… 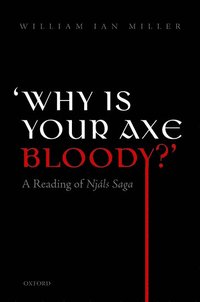 Summary:
Njals saga, the greatest of the sagas of the Icelanders, was written around 1280. It tells the story of a complex feud, that starts innocently enough in a tiff over seating arrangement at a local feast, and expands over the course of 20 years to engulf half the country, in which both sides are effectively exterminated, Njal and his family burned to death in their farmhouse, the other faction picked off over the entire course of the feud.

Law and feud feature centrally in the saga, Njal, its hero, being the greatest lawyer of his generation. No reading of the saga can do it justice unless it takes its law, its feuding strategies, as well as the author’s stunning manipulation and saga conventions. In ‘Why is your axe bloody’ W.I. Miller offers a lively, entertaining, and completely original personal reading of this lengthy saga.

summary from the National Library of Scotland catalogue

This morning I noticed this on our ‘new books’ shelf:

Among other things it contains an ‘opera’ recounting the dramatic events in the seminal case of Donoghue v Stevenson!
It reminded me of some of the other, less serious, legal books that are available. Here are a few examples…