Chatting with a colleague today, he told me he was planning to climb Arthur’s Seat to the Salisbury Crags, while off work next week. Something he’s never done before. I said he should also try to find “the spot where the wee coffins were discovered” and he had no idea what I meant. Neither did the next person I mentioned it to… or the next.

I do not recall how I learned this story myself. I do know that when Ian Rankin mentioned it in his Rebus story “The Falls“, I knew exactly what he was talking about. Did my dear grandad tell me the tale when I was a wee smout? I’ve seen the remaining coffins displayed at NMS but did I stumble upon them that first time or seek them out? I can’t remember.

However I learned it, this is a unique Edinburgh story that deserves to be told. NMS has compiled an excellent and detailed retelling here so I only need to summarise.

In 1836 some boys playing on Arthur’s Seat discovered a hidden stash of tiny wooden coffins. 17 coffins were apparently found but some were broken or lost. The remainder eventually found their way to NMS years later and can be viewed there now.

There was, of course, great excitement in the press at the time. No one knew who had built the tiny coffins or why. There were various theories but none answered all the questions surrounding the find. My own favourite, and I believe the same explanation given in The Falls, is that these tiny graves were made in remembrance of the victims of Burke & Hare, the infamous Body Snatchers. There may be a slight discrepancy between the number of coffins and the known Body Snatchers victims… But couldn’t it be that they killed more people than they admitted to? It’s not as if they were paragons of honesty.

And who made the 17 tiny offerings? This is still an absolute mystery but I do have my own thought about that.

There was insufficient evidence to convict both Burke and Hare so, the authorities convinced William Hare to turn “King’s evidence” and betray his co-conspirators. Beginning on Christmas Eve 1828, William Burke stood trial for murder in a courtroom which has since become part of the Advocates Library! Burke’s co-accused was his “common law wife” (i.e. bidey-in) Helen McDougal. Burke was found guilty and was hanged and his body sent for dissection, but the case against McDougal was not proven. She was released and nothing much is known about her life from that point.

I wonder if Helen McDougal, in guilt and shame, could have had anything to do with the making of the tiny coffins. Small offerings to the dead she had been partly responsible for. Hidden away… but placed on the city’s most prominent feature. There is no evidence of this that I’m aware of, it’s just my own theory, but it’s as likely as anything else in this odd story.

And finally – Coffin number XVIII. In December 2014 NMS received a mysterious package containing another tiny coffin. The craftsmanship and accompanying card point towards this being a work by Edinburgh’s mysterious, magical Book Sculptor. I think this makes a wonderful end to this twisty tale. 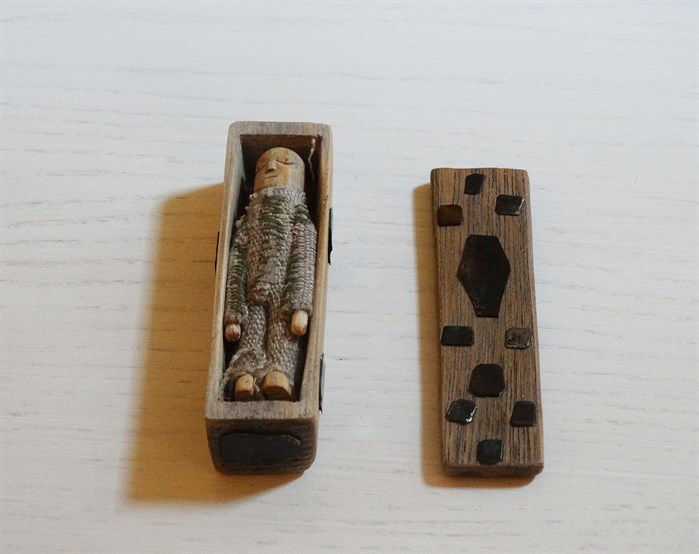